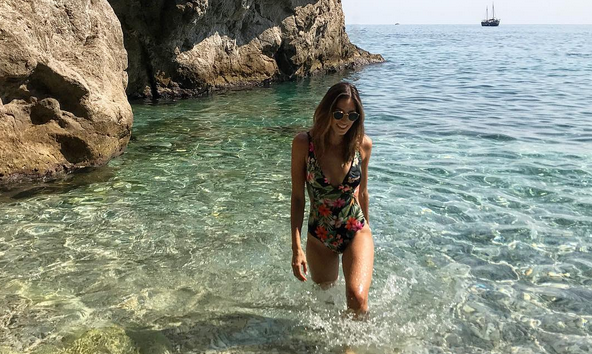 Social Networks have changed the world, allowing us to communicate with each other in ways previously completely unknown. The technology has also allowed us to follow our favorite celebrities as if they were our own closest friends. Thus, admirers of Mexican model and actress Fernanda Polin know pretty well she scheduled her summer vacation on the Coasts of Croatia.

Beautiful Mexican brunette is very active on her Instagram, from which we learned about her whereabouts. She is currently exploring the coastal region of Dalmatia, spending her time visiting the landmarks of Dubrovnik and its friendly neighboring coves. Polin learned a few words of Croatian as well, and had a great time in Split’s luxurious Radisson Blu Resort. Early jogging brought her to Banje Beach, one of Croatia’s many notable places and an unofficial symbol of vacations in the country.

It is unknown for how long will the famous model stay in Croatia, before joining with her equally popular husband Duilio Davino. The well-known Mexican soccer player currently works a chairman of CF Monterrey, but maybe he will find some free time and accompany his spouse in a glamorous Croatian holiday.

Which destinations in Croatia would you suggest Fernanda Polin to visit? Share your thoughts in our comments section below, and don’t hesitate to join our own Social Networking.