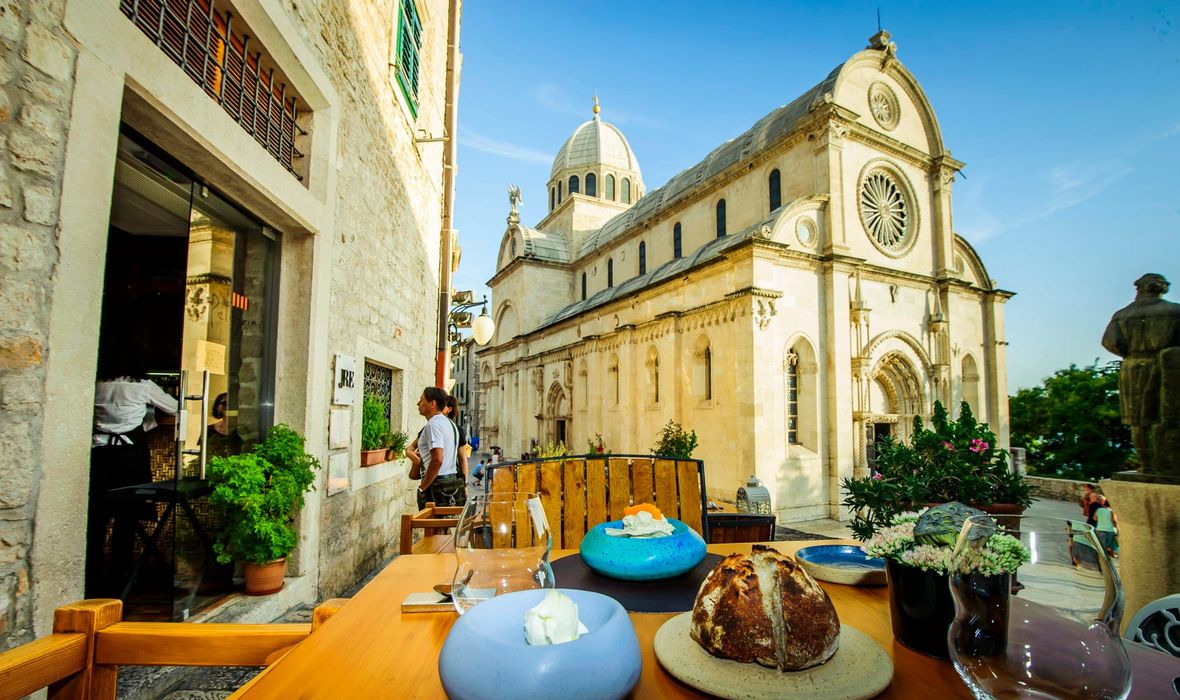 For Dalmatian Town of Sibenik, restaurant Pelegrini is not just a fine dining place. It is a landmark restaurant that visitors shouldn’t miss during their stay in one of Croatia’s most cherished coastal destinations. Located immediately next to Saint James Cathedral, Pelegrini has been proclaimed the best place to eat in Croatia on several occasions and is a proud winner of two Michelin Stars.

Reviewer Dario Naletilic of Dobra Hrana magazine has recently dined in this famous restaurant. We share his thoughts on Pelegrini. 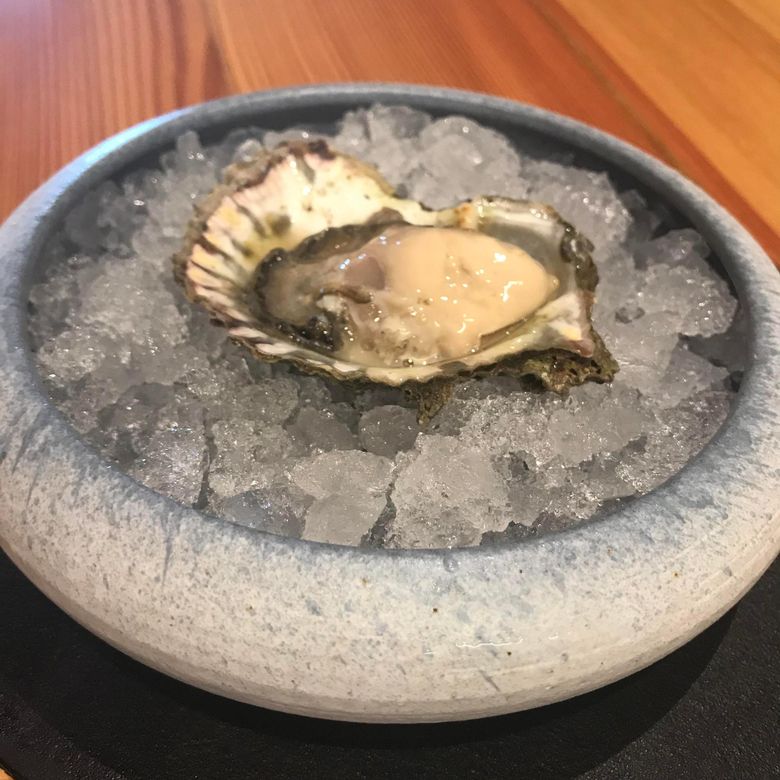 “My late spring day lunch begun with a cold oyster, a perfect way to refresh my mouth and prepare for upcoming feast. Pelegrini usually offers its visitors meals of at least four courses. Twenty four orders are existent on the menu, and if willing, the guest can order a degustation selection that presents the offer in wide scope. “

“The second dish arriving from the kitchen was a mini cold-warm veal salad, followed what was the best meal of the day: an interpretation of fish salad that excelled in creativity, taste and decoration. The cod in white served as a base, upgraded with chops of fish meat, carrot, tops of wild asparagus, salicornia and lentil chips- all this leading to a rhapsody of color and aroma.” 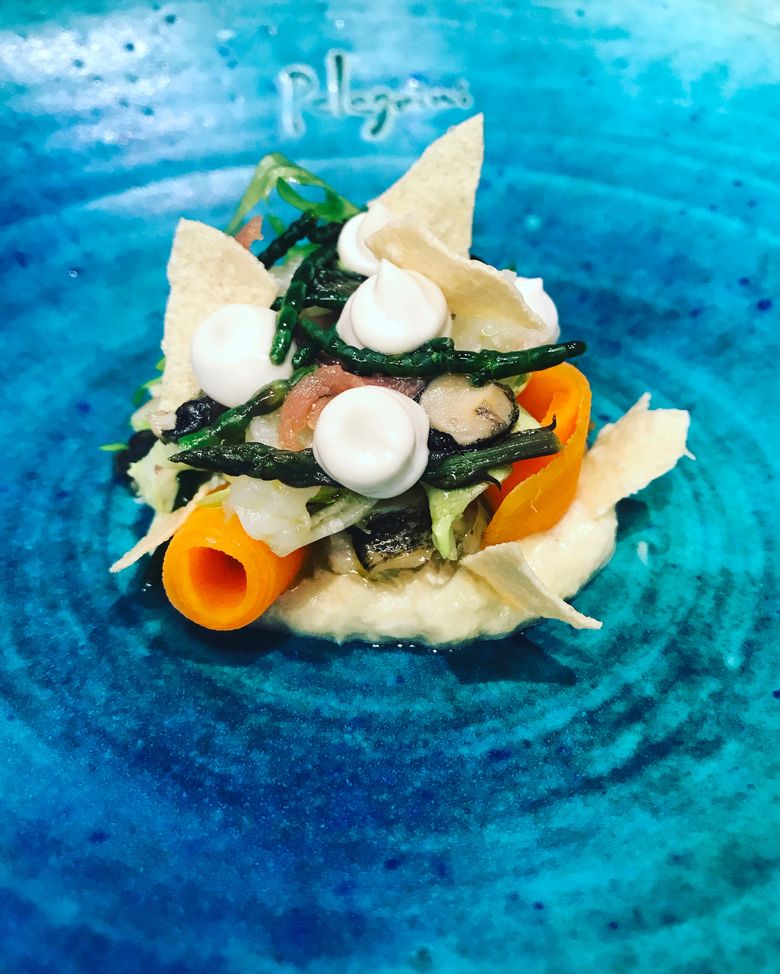 “A meal called teletina i volak (that can be translated as ‘veal and volak snail’) has intrigued me the most on the menu. I was very happy when the waiter brought me a pair of pincers for snail dining. It is a witty approach to serving, as the meal is actually a variation of famous Italian classic called vitelo tonnato. The veal is raw or just slightly marinated, while the snail replaces tuna from the original recipe. The shell is filled with small butter pieces that you pick up with pincers and spread over hot corn bread or scone that was dipped in olive oil.” 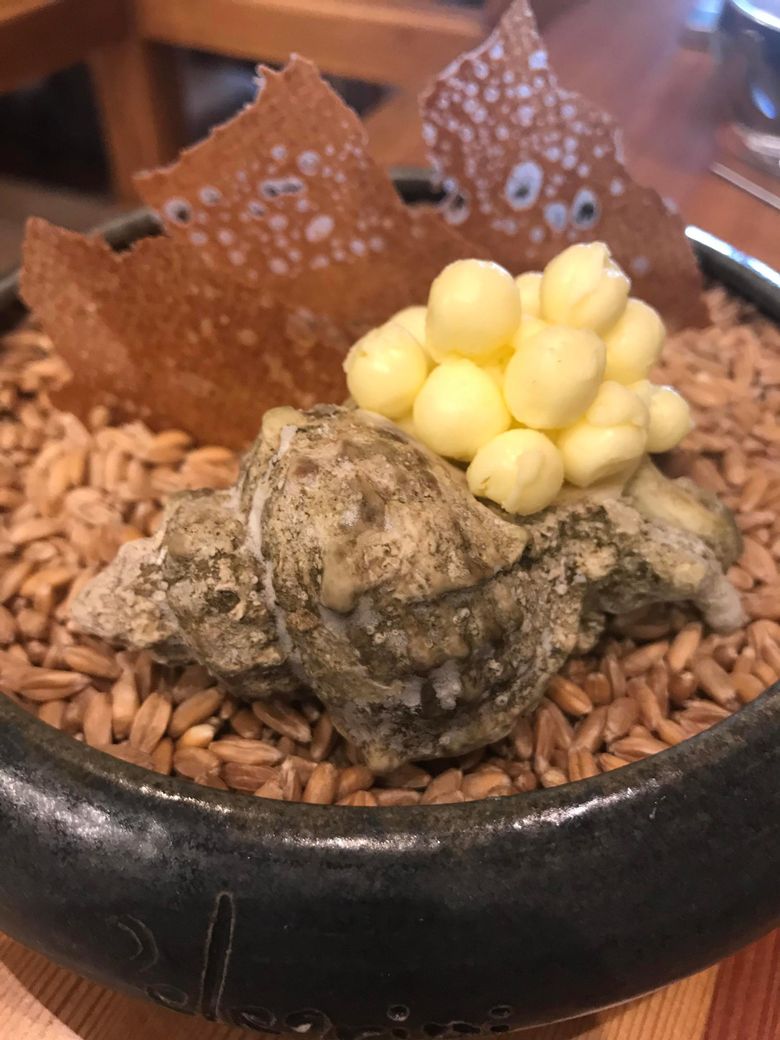 Naletilic has also tried a dish called lignjun suta, essentially a seafood pastasciutta with squid being the main ingredient. Although flawless in execution, the dish was perceived a step below of what is expected from Pelegrini class. A hake served in prosciutto with mangel and mashed Jerusalem artichoke was an ideal for those who favor the meat taste on account of fish aromas. 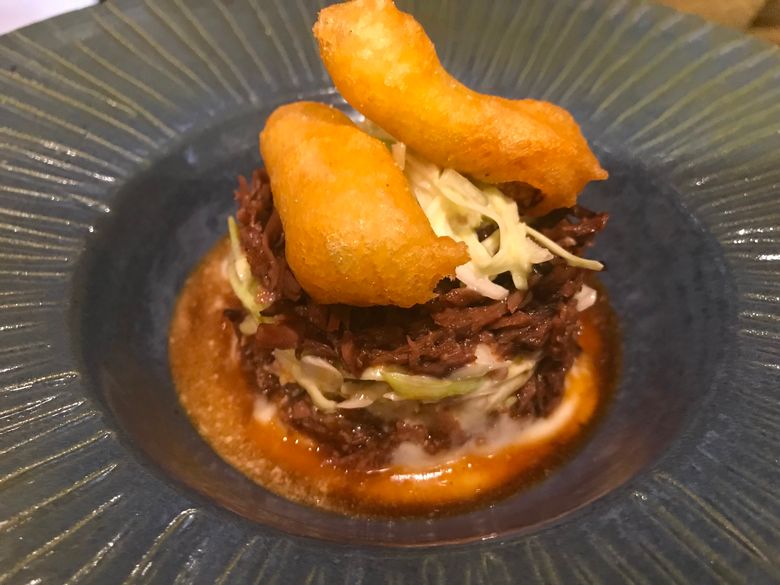 It should be noted that restaurant’s chef participates in making of served prosciutto, which is called Alduk and should be considered among the best in Dalmatia. The reviewer also lauded a dish called kokot i verzot that included fish chops with kale. For sweet tooth, Pelegrini offered ‘paradizot’, known as snenokle in inland Croatia and generally recognized as ‘floating islands’ in English language. The dessert was a yellow cake that bonded coconut and ananas. “It is a shame that these fruits don’t grow in Croatia, but its nice to know that Pelegrini doesn’t stick only to local ingredients,” Naletilic added. 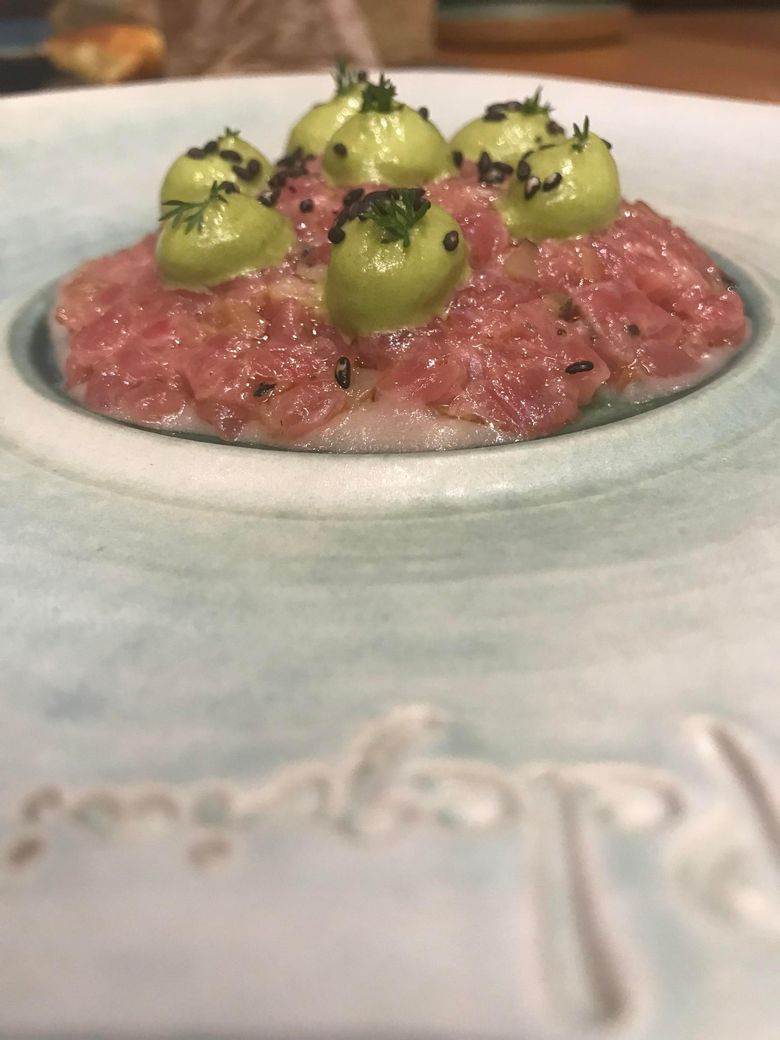 “The wine chart offers a lot of opportunities to try Croatian products. You can also opt for degustation combinations and wine pairing,” the reviewer wrote. “I can only notice the lack of cold harvests and sweet wines of Ilok which would be nice addition, especially for foreign visitors that wish to try more local wines.”

“Chef Rudolf Stefan has always dreamt of serving a tomato that was recently picked in local garden with merely a few drops of olive oil and flower of salt,” Naletilic explained. “The concept known as ‘from farm to table’ isn’t the newest, but it took some time for it to be recognized in the highest class of restaurants. The influence of Pelegrini and his owner can be seen through their initiatives such as Chef’s Stage and Budi Foodie foundation that trains young cooks. Such passion and dedication is noteworthy, but I somewhat selfishly desire more cooking in the upcoming years.”

Eager to experience Pelegrini’s expertise? Find this restaurant in Sibenik on address Jurja Dalmatinca 1 and enjoy the craft of what is among the best dining places in Europe.