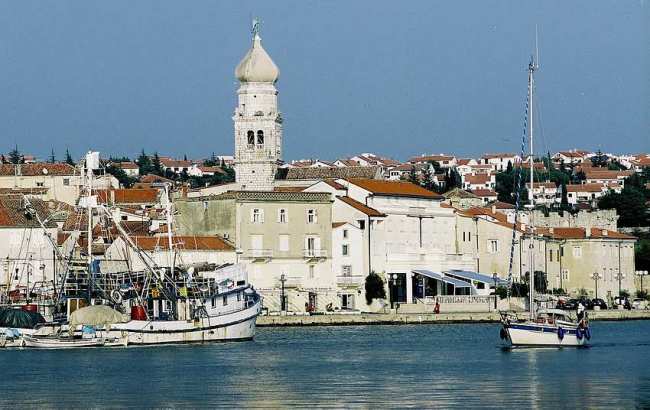 Was mentioned by: Homer, naming it Koureto in one of his poems

Krk is pronounced somewhat like Captain Kirk, and the name suits it well. The island is really like another planet. Ok, maybe we’re exaggerating a bit, but in the world of business schedules and frustrating work hours we all so unwillingly participate in, this island in the middle of the Adriatic does look like something from distant space.

What is the story of Krk Island? How can you get there without a starship, and what can you expect from it? Learn why you should visit below!

Like Brac, Krk has its own airport, providing easy transportation of international visitors to its soil. Technically speaking, the airport belongs to the coastal town of Rijeka, which is quickly accessible by crossing the bridge connecting Krk with the mainland. Crossing it might provide you with impressive sights of the Kvarner region, especially when the skies are clear, as you can then see out for miles.

An interesting fact about Krk’s Bridge is that it features the second longest concrete arch in the world. Another second best – it was formerly considered the largest of Croatia’s islands but recently lost the title to Cres. It’s hard to say if that’s due to today’s more precise methods of measurement or due to Krk’s potentially a shrinking coastline.

The bottom line? You can reach Krk Island from anywhere in Europe in under two hours. Sound tempting? Of course it does. Some people spend that much time driving to work every day.

Sure, we all enjoy a good beach. And beaches are inherently healthy – if not because of the fresh air and physical activity, then surely because they provide a chance to calm the nerves. But the beach in Cizici, a small settlement in Solina valley, goes one step further. It actually does wonders for your skin thanks to the healing properties of the mud found there. Covering your body with it can help dermatological issues, so give that cellulite a hard time with a visit to Cizici.

The beach is also specific because of its low water level. One can easily walk up to two kilometers from the shore, as the sea will barely make it to the knees. As such, Cizici are a great place to enjoy picigin or other water games.

For centuries, Krk Island was inhabited by fisherman and farmers. As such, it developed a strong culinary tradition based on extra virgin olive oil and freshly caught fish. Rich pastures provided the cattle with food, and in return, items such as roasted lamb or traditional goat cheese also found their place on menus.  Of course, everything is spiced up with local flavors, herbs and fresh ingredients.

Krk Island is full of konobas, traditionally ornamented taverns which offer local delicacies. The island is known for surlice pasta, and konobas usually serve them home-made with a specific sauce to one’s liking. Prosciutto is a great appetizer, and a glass of vrbnicka zlahtina wine makes for great company beside the plate. As for dessert, a cake called presnec, made of goat cheese, is a good pick.

If their time permits, konoba owners have a habit of giving guests a tour around their estate, showing them the animals and fields from which their menu come.

The lost treasure of Biserujka cave

The village is called Silo. The cave is called Biserujka. The old smuggler’s name is unknown. What is believed, however, is that this person hid a tremendous amount of gold somewhere inside the grotto.  Whoever finds it won’t have to worry about the parking tickets for the time being.

But even if you don’t find a chest full of coins, you might enjoy the mysterious, silent world of Biserujka. It’s well-lit, has a constructed path with protective fences, and as long as you don’t touch them in their sleep, a family of bats surely contribute to the scenery.

And, of course, something for bookworms. In 1851, a young priest discovered a tablet in the stone floor of the early Roman Church of St. Lucia. It was of considerable size, weighing something under a ton. His discovery was interesting to historians, but nobody expected it to be the oldest written document in Croatian history.

The tablet was inscribed with Glagolitic letters. At first, it was believed the text was some sort of confidential message which might change history as we know it. At the end, it was concluded it was simply a legal document stating that Croatian King Zvonimir donated the ground to the order of St. Benedict in the year 1100. The text was important, however, because it was clear that Croats had their own state at such an early age.

The Baska Tablet was transported to Zagreb’s Academy of Sciences and Arts. Baska holds a copy of it for visitors, careful to keep the original from being damaged.

Krk Island– a cradle of Croatian written history, and an Adriatic island two hours away from any location you can think of in Europe. What more can you wish for? Book your flight, and we’ll see you over a piece of presnec.