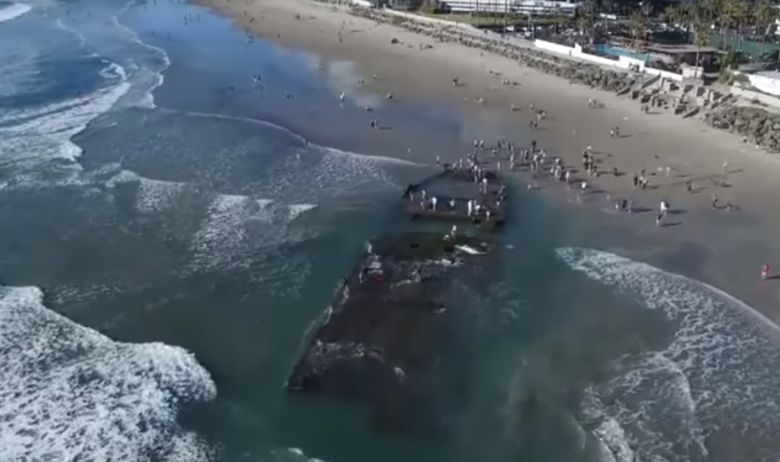 A recent documentary called What on Earth, produced by Science Channel, has resurfaced the name we haven’t heard in a while. It is Lyubov Orlova, a Russian vessel that is supposedly venturing the world seas on its own. Since it was constructed in Kraljevica Shipyard, it is often perceived as Croatian cursed ship that drifts the surface without any crew.

But let’s tell the tale from the start. In 2016, strange vessel wreckage has emerged on the coasts of California. Brought to beaches by strong waves, the gigantic structure has caused a lot of stir to local populace. Naval experts explained that these things can happen when strong tides elevate wreckages in the sea, drifting them for miles unless they hit solid ground. It was up to officials to recognize the ship, and see where it came from.

The first thought was that mysterious vessel was actually Lyubov Orlova, a large transport carrier that was constructed by Croatian shipyard for Soviet Union in 1976. The owners fell in debt during financial crisis, leaving the ship in one Canadian harbor. Without solid maintenance and any crew whatsoever, the transport has accidently detached from the dock in a strong storm. She reached open seas, and since nobody has seen her in a while, people deemed she sunk.

However, as years passed, the ship’s signal was caught on radar systems several times, suggesting that it is still on surface.  As a matter of fact, in 2013, Lyubov Orlova has sent two distress signals, coming from the middle of Ocean. Because of these incidents, the ship’s name became a running joke in maritime professions, often referred to as Russian or Croatian cursed ship.  The latter nation likes to comically suggest how their vessels are unsinkable, Orlova being the key example.

The Californian experts, however, concluded that the wreckage which emerged on their coasts is not of Croatian origin. The ruined structure was made of concrete, while Lyubov Orlova is a metal ship. It is believed that ocean actually brought back what was left of S.S. Monte Carlo, a tanker that was overtaken by organized crime and served as an offshore casino and bordello. One can say, the ships in this story do have some interesting background to expose.

From what is known at the moment, the Croatian cursed ship might still venture the seas and oceans of our world. But in case you accidently find her drifting somewhere, don’t try to access it. Not only is she damaged by rust and lack of care, but according to some sources, she might be infested by cannibal rats. Lacking any food, the rodents onboard turned against each other for nourishment. Not a kind of animal life that you might want to encounter.