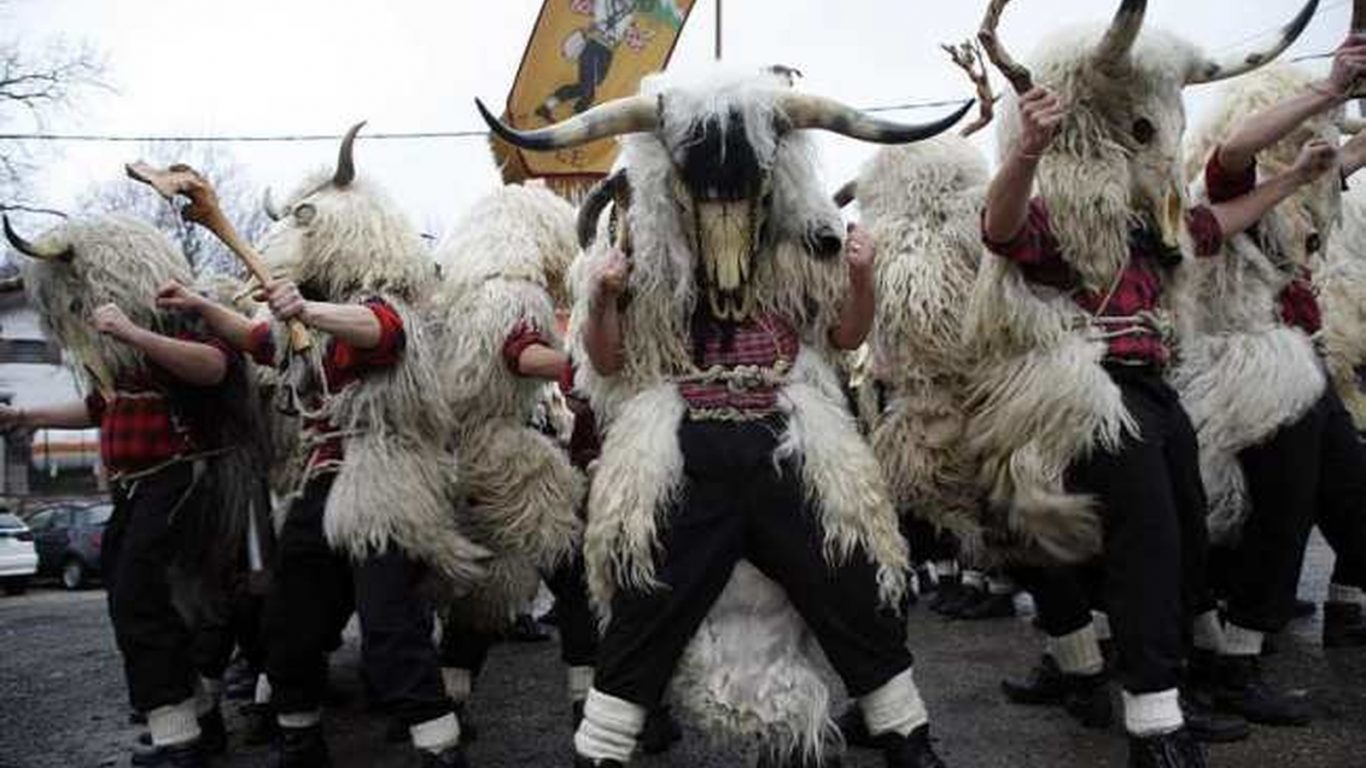 There are many kinds of seasonal jobs for young people in Croatia. Some become waiters, other opt to become lifeguards, and some apply for driving duties. But not me. I had to be something more original. I had to become a Zvoncar.

“Zvoncar“ literally means “bell ringer.” The story goes something like this: in ancient times, it was believed that evil spirits inhabited the forests and plains around Croatian villages, performing all kinds of mischief upon the local population.  Whatever bad happened in those settlements, these spirits were accused and blamed for it. Of course, humans had to defend themselves somehow, and as every good ghost hunter knows, the best way to fight the frightening thing is to frighten it itself.

Thus, the bravest people of the village were chosen to become zvoncars. Wearing costumes made of sheep skin, and with horrid bull-like masks on their faces, these heroic souls were supposed to beat away the spirits with their own weapon — their ugliness,the wilderness and noise. To support the latest feature, they wore bells, usually tied on a belt, which would create loud noises with a swing of Zvoncar’s butt. This is how they got their name.

These people would go through the village, usually on the days of festivities, to chase the evil spirits away, but also to provide entertainment to the population. It was considered a very important job in the settlement’s life. Not everyone could be a zvoncar. Chasing off spirits is, after all, a very important job.

Of course, zvoncars became a major tourist attraction along the coastline, especially around Rijeka and Kastav, where their presence was most frequent throughout history. So the local tourist office ordered several original costumes to be made, hiring young people to wear them and entertain the guests. Among these people was yours truly.

What kind of a job was it in practice? Let’s describe it like this: you are supposed to be wearing several layers of sheep skin (wool included) in the peak-season heat of the Mediterranean summer. In addition, you have a huge, clumsy, difficult-to-breathe-in, I-can’t-see-a-thing mask on your head.

You are also supposed to carry a small wooden axe in your hand. Probably because zvoncars used to cut ghosts into pieces or something like that. I lost mine once, so a local lumberjack lent me a gigantic, professional axe that could barely be carried by two hands. The main problem was that it actually made me look very scary (a costumed person wearing a mask and carrying a small wooden axe is silly, but one with a lumberjack’s tool looks like a maniac about to indulge into a murder spree). So I got a new axe, and a salary cut.

But probably the most unique feature of zvoncarship that year was our boss, whom we called “the general.” He was an elderly man, a soldier by profession, who fought in all the wars of the last century (including World War I, in which he participated as an alarm — each time the enemy would get closer, he would start to cry in the cradle).

The General was given the task of leading Zvoncars on account of his disciplinary skills, authority, and a decision of town officials to occupy his mind with something before he starts blowing things up in boredom. He insisted we do the job army style, so every morning at 6:00 a.m. we were supposed to gather in front of the tourist office, put on our masks and costumes, and stand in line for inspection.

He would usually find something lacking, for example the ears of our masks were not in the same position, the wool of our costumes was not combed in the right way, our the way we were holding our axes looked clumsy, or our bells were not tightened well enough to our belts, causing less noise than they should.

The inspection would last for half an hour, after which we would raise the flag of Rijeka, singing the town’s hymn. Nobody really knew the words, but The General never commented on our humming. Of course, he knew every line, and was the loudest of us all.

This  early-morning event  was so silly, absurd and humiliating that certain tourist officials thought it could be a new tourist attraction on its own. Surely, the foreign visitors would pay to see a cranky old man yelling at a bunch of kids dressed like cows. The General was shocked at such an idea. He said that military protocols are not seagulls or monuments to be photographed for money. However, the tourists were welcome to witness our army traditions as they are. In other words, they can photograph us for free, as long as they do not interfere with the whole process.

The idea was postponed for another year, when I applied to a much less stressful job (as a fireman’s assistant). Who knows what happened to the order of Zvoncars with The General in command? I certainly don’t. Knowing his attitude, they are probably assisting the US Navy Seals and French Foreign Legion in their everyday assets. Scratch that — the Navy Seals and Foreign Legion are assisting them.

But one thing is sure. With Zvoncars alive and The General in charge, no evil spirits reside near Rijeka.