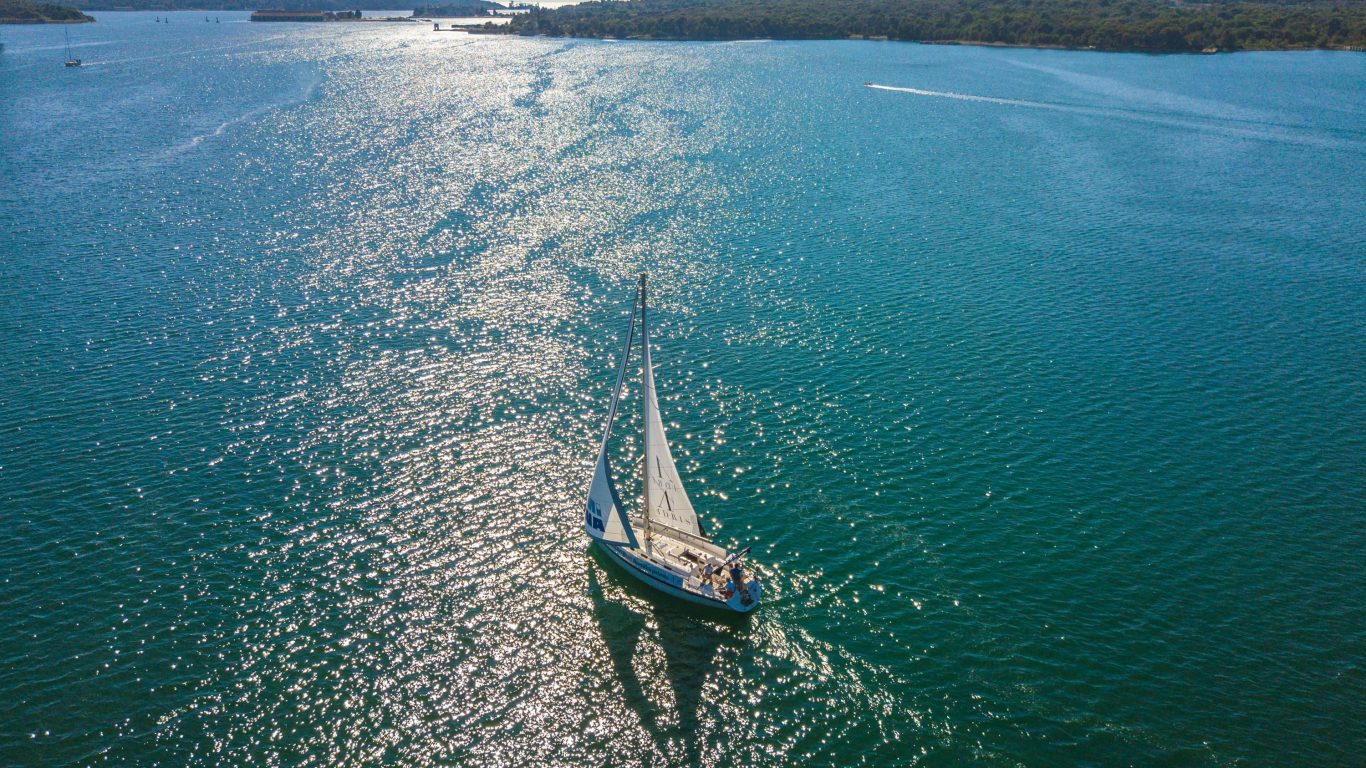 A couple of weeks ago, the five-member crew of Jutarnji list Nautical Patrol set off to sea on their sailboat Maslina.

This unique action, the first of its kind in Croatia, started under the patronage of the Croatian Tourist Board, in cooperation with the Ministry of Tourism and with the support of many sponsors. The crew embarked on their adventure at the ACI’s largest and best-equipped marina Umag. There, among the sailboats and yachts moored at 475 berths, our patrol came aboard one of the most award-winning sailboats of the Adriatic, Mago di Umago, and talked to the boat’s proud owner, Vilim Drascic.
– This racing sailboat was purchased in Italy a decade ago. The boat, which cost nearly 1 million Euros, is a kind of prototype made of carbon, which can accommodate 18 to 20 crew members – Drascic proudly told our crew.

Our patrol continued their journey from Umag to ACI marina Pula, a cake-looking circular building with 3 layers – hence the nickname “Cake”. At the marina, the crew met with Gerald Ulm, a 63-year-old Graz native who owes his love for sailing to Jules Verne. For the last 20 years this Austrian who calls Croatia his nautical home, has been mooring his sailboat at marina Pula. Our hard-working crew members also talked to Karin Süssi from Austria, who, after recently becoming a grandmother, has decided to put her 25-metre sailboat Carla up for sale after 20 long years of sailing. Still, Karin is very selective when it comes to buyers.

– I’m looking for someone with that sparkle in the eye that will immediately reveal they have fallen in love with the boat – says Karin.
Our sailors set sail to marina Veruda, an hour and a half away by boat. With its 530 sea berths and 250 dry berths marina Veruda is one of the main stations for boats where they are, owing to the sea’s unusual and specific currents, literally washed and cleaned by it. Our curious crew took a peek at the magnificent Nordland, a wooden beast owned by Dr. Oetker. Many other celebrities have also decided to anchor their boats at marina Veruda; however, the marina guards their privacy all too well.

Cooking season in our crew’s galley opened on the third day of the journey. When our sailors reached the fourth marina on their tour under the hot Adriatic sun, they realized they have yet to take a dip in the cool sea. They have no time for swimming, as the patrolling must be done perfectly, they say. The fourth stop on the journey was ACI marina Pomer. The marina, built in 1984, underwent reconstruction that has resulted in a beautiful Mediterranean-looking marina boasting, among other, a new reception, shop, restaurant with shaded terrace and new sanitary facilities. Romeo Cetina, the manager who was also in charge of the marina during the challenging process of removing the old facilities and the construction of new ones, is pleased to say there are no free berths in this second season following the reconstruction. Most importantly, marina Pomer has retained the features of a peaceful, family-oriented location with returning guests.

The week’s last stop on our Nautical Patrol’s tour was ACI marina Cres. “The pearl of Kvarner and the most beautiful place you can see in your lifetime”, says 70-year-old Wolfgang Ehricke, a German millionaire who decided to replace the 300 square metres of luxury in Falkensee bei Berlin for the 15-metre sailboat Carpe Diem, anchored in Cres. He has travelled the world, yet only here can he experience the beauty of sea and joy of sailing to the fullest.
– I have recently sold my company, purchased our boat Carpe Diem and decided to moor it at marina Cres. My wife and I have sailed up and down the Adriatic, but Cres feels like home, so we spend 6 months a year here –Ehricke, dubbed as “the guardian of marina Cres”, told our team of journalists.