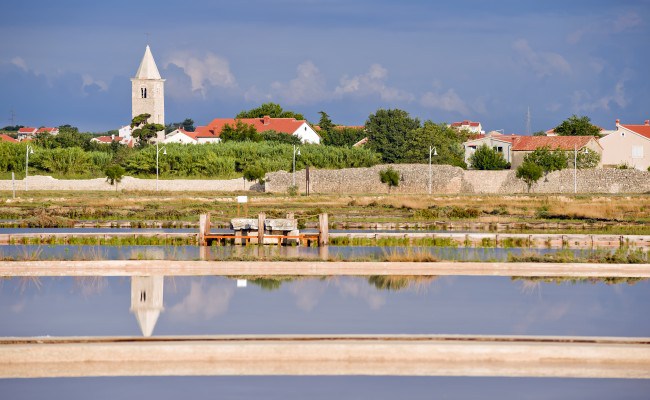 If you take a tour of the salt pans in the period between March and September, you may experience a rare sight in form of a black-winged stilt. The luckiest ones may even get the bird to pose for them. Since this rare bird has made a nest next to the walking trail in the salt pans, skilled photographers may get to take some beautiful photos.

The advertising campaign for the Nin EDEN destination focuses on environmental tourism with an emphases on bird life and other sustainable forms of tourism. Thanks to its muddy and sandy shallow shores and swamp areas surrounding the salt works, the Nin lagoon presents a unique biological value and is an important bird habitat both for Croatia and Europe.

The lagoon is thus frequented and inhabited by nesting, migratory and wintering birds that chose this area because of halophyte plants which offer optimal living and breeding conditions to swamp bird species. Bird watchers will get a chance to spot different species, including the rare black-winged stilt (Himantopus himantopus), which is on the IUCN Red List of Threatened Species, the Kentish plover, grey plover, etc.

The number of the endemic black-winged stilt breeding pairs visiting the lagoon annually has seen an increase. This is exciting news as this bird species population has dangerously decreased in the rest of Europe.

Since being awarded the EDEN Award for the European Destination of Excellence in 2010, which includes sustainable development, the Town of Nin Tourist Board has been marking the European Bird Count Day and, on this occasion, organizing educational and environmental panels at the Nin Saltworks.

During the past seven years aimed at the formation of a new tourist product, the so-called bird watching tourism, Nin has been focusing on the development of the Northern Dalmatia Birdwatching Centre, as well as on the construction, reconstruction and full design of thematic trails covering several kilometers. It has been working on including all the necessary equipment for birdwatching and setting up several observation points in the Nin Lagoon.

The Visitor Centre will provide information to visitors on the rich nature of the protected areas and Natura habitats as well as Nin, Pag and Northern Dalmatia natural heritage.