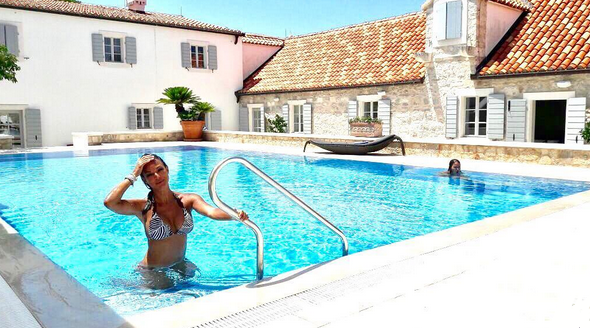 Every year, Croatian coast attracts a lot of internationally-known celebrities. From actors to pop-stars, everybody wants their own haven on Adriatic Shoreline. American actress Eva LaRue, known for her role of detective Natalia Boa Vista in highly popular crime series CSI Miami, is currently enjoying the hospitality of Dalmatian region.

If we are to believe LaRue’s Instagram profile, she is really enjoying her time. This is not the first time for the renowned actress to be in Croatia, as she attended a business conference on Health Tourism in Rovinj earlier this year. During summer months, however, she opted to visit The Island of Hvar and the beautiful City of Split.

LaRue described Croatian Sea as crystal-clear, and views from local forts as unbelievable.  She also repeatedly noted that she could stay on Hvar for a month of vacation. Of course, she didn’t miss Laganini Lounge Bar, a site that became a sort of unofficial symbol of Palmizana Marina.

Every part of #croatia is a magnificent surprise!! I will be back! Swipe 4 photos @martinis.marchi @stories_hotels #luxurytravel #traveblogger #evatravels #solta

“Amazing! Too much to do in Croatia and so little time,” Eva concluded one of her messages. From what is known, she is staying in Mediterranean country for the next two weeks. The only drawback she had so far is that her mobile phone fell into the sea. But knowing the thorough nature of CSI operative that she portraits in the series, she surely found it by now.