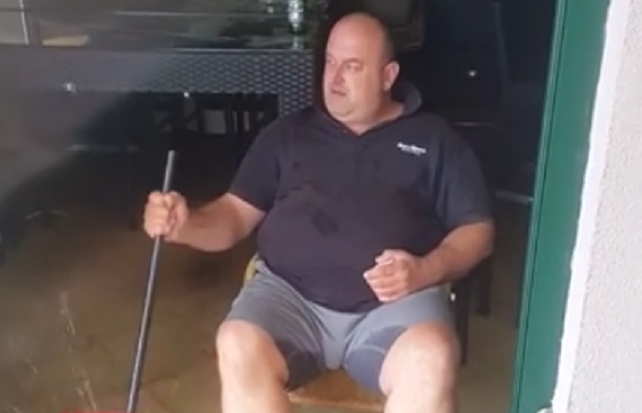 The fall season has come with a bang. Well, more precisely, with strong winds, harsh rainfalls and occasional catastrophic hurricanes. In such grim times, it is good to know some people stand firm to themselves. The recently published video clip of a Dalmatian fighting the flood has become viral on Croatian side of the Internet, and is slowly gaining momentum on international scale.

The clip was posted on Facebook by Kristijan Feste, a resident of Dalmatian settlement called Starigrad. The region is currently experiencing very difficult times due to flooding, with many houses ending up filled with large quantities of water. The rescue services and pump crews have their hands full with more drastic cases, leaving people like Kristijan to deal with the issue on their own.

Mocking the stereotype of Dalmatians being slightly lazy, Feste took a chair on his front porch and begun extracting the water with a plastic shovel. He did that while sitting, so that he doesn’t get tired too soon.

The clip of Dalmatian fighting the flood soon became viral, and has been seen by almost quarter of million people at the moment. In addition of becoming an Internet sensation, Kristijan also gained renown as a national hero. Even the catastrophic circumstances can’t break people’s habits and tendency to do things their way.

In these problematic change of seasons, where climate looks determined to give us a hard time, Kristijan’s small performance might be just the encouragement one needs.