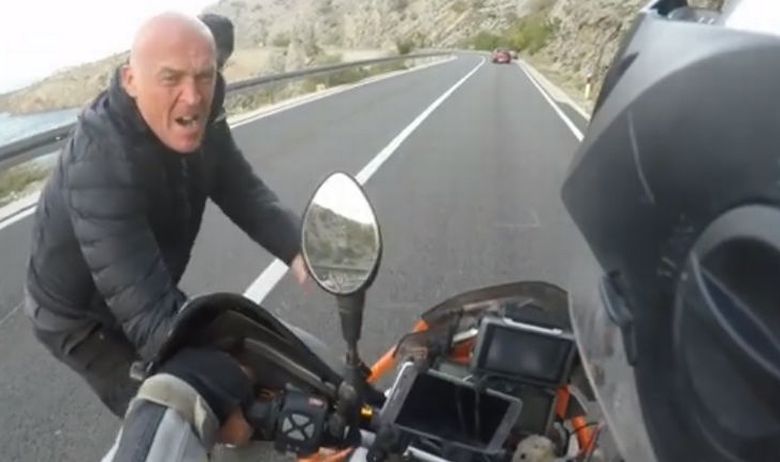 You might have heard about bura (sometimes written bora), a powerful wind that strikes Croatian coastal area. A lot of people underestimate its power, although it is capable of knocking down a loaded truck. And that bura wind and motorcyclists aren’t a good combination was proven by a recent experience of Wissam AL-Jayyoussi, a biker that travels the world raising the awareness of children needs in Middle East. He also runs a YouTube channel Goodwill Journey where he documents his world-wide voyages.

“I have been fighting mother nature for three days, rain, wind and snow in Croatia. Today before starting, a 60+ year old man told me wind in this area is like nowhere else in the world. I was too proud to listen, “Wissam wrote next to a clip of his encounter with the Croatian wind.

I have been fighting mother nature for three days, rain, wind and snow in Croatia. Today before starting a 60+ year old man told me wind in this area is like no where else in the world. I was too proud to listen and was saying to myself "he has no clue what i have been through, i rode Patagonia, Australia, Gobi desert and so many places known for strong winds, what does he know". Well i was wrong, he knows his country, this is the worst i have seen. i had to turn around and run away from the cost heading inland. The wind did drop down after 50 KM going in land but i was hit with snow, still better than that situation. PS: i cannot believe neither myself nor the sheep skin fell off the mountain :)UPDATE: It seems that the guy who helped me out of all people that passed and did not help is very famous in Croatia. Now i know his name and can tell him thank you soo much for stopping:Aramis Naglić (born 28 August 1965 in Rijeka) is a Croatian basketball coach and former basketball player. His most important trophies as a player are the silver medal with the Croatia national basketball team at the 1992 Summer Olympics and two European Cups with Split.

Posted by Goodwill Journey on 14. studenoga 2017

During his motor ride, struck of bura was so strong that he couldn’t keep balance on the vehicle. After some time, he just couldn’t drive anymore, so he laid down the bike and waited for wind to cease. Being in the middle of the road wasn’t a pleasant position, and the whole situation was recorded thanks to helmet camera.

But soon, a rescue has arrived. A single hero appeared out of the nowhere and assisted the good-hearted biker. It was none other than Aramis Naglic, one of the biggest names of Croatian basketball scene and current coach of Zadar team.  With his help, Goodwill Journey continued its mission without many issues. The whole clip became viral, viewed by several hundred thousand people at the time of writing this article.

The recorded situation, however, should be considered another reminder not to underestimate the natural powers. Bura wind and motorcyclists go well together only if the latter have their vehicles in garages. No matter if you are in Croatia or in some other country, observe your surroundings, consider weather reports and follow the tips of people living in the area. That way, every travel will be pleasant and fulfilling.