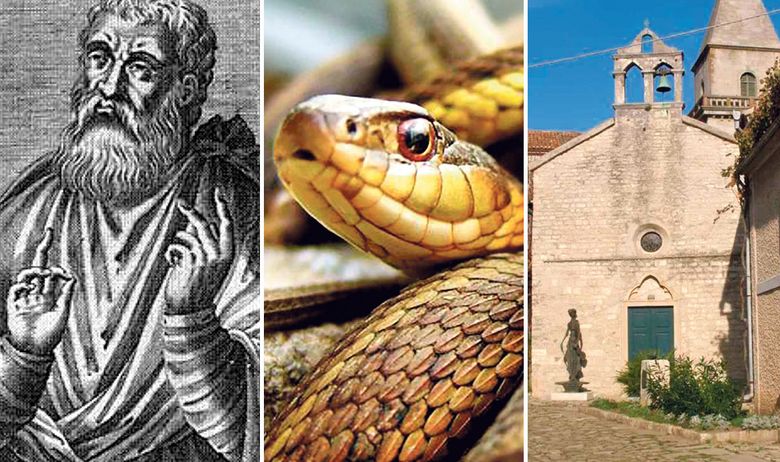 Snakes are fascinating beings that are always exciting to observe. But of course, the pleasure requires safe distance or at least a thick glass of reptile habitat. Yet according to local tales of Croatians living on Islands Cres and Losinj, there is a somewhat uncommon way of protecting yourself from these not-always-friendly beings. You just have to take a pebble from a cave on Osorcica Hill.

The tale goes like this: ages ago, a Roman Catholic bishop called Gaudentius had ecclesial rule over Osor Town. Born in a tiny village of Trzic that neighbors the large settlement, the priest provided spiritual guidance to regional inhabitants and took good care of their spiritual wellbeing. However, there was one thing in which he was at odds with general populace. He absolutely detested marriages of relatives, which was common practice in that era’s nobility.

Once he openly remarked the forming of one such bond, people of Osor chased him away. Having no home and only firm belief in Christian God, Gaudentius roamed the wild lands of Cres Island in search of a hideout. Finally, he discovered a remote cavern on the slopes of Osorcica. He knew that it was probably inhabited with poisonous snakes, so he made a deep prayer asking for deliverance of those beings. God granted him the wish to an extent that all serpents left Cres and Losinj for good.

Gaudentius has fundamentally reached Rome and Ancona, where he spent the rest of his life. But that was not the end of the story. The legend continues one century later, when his body was miraculously brought by seas to Osor again preceded by mysterious bell tolling across the town. Since then, he is highly regarded in local tales and history.

The cavern on Osorcica hill is available for a visit. As already mentioned, there is a saying that picking up a pebble from the cave protects the wielder from snake bites. However, Holy Scripture reminds that one shouldn’t test God. So instead of carrying geological items in your pocket, refrain from intimidating the poisonous reptiles.