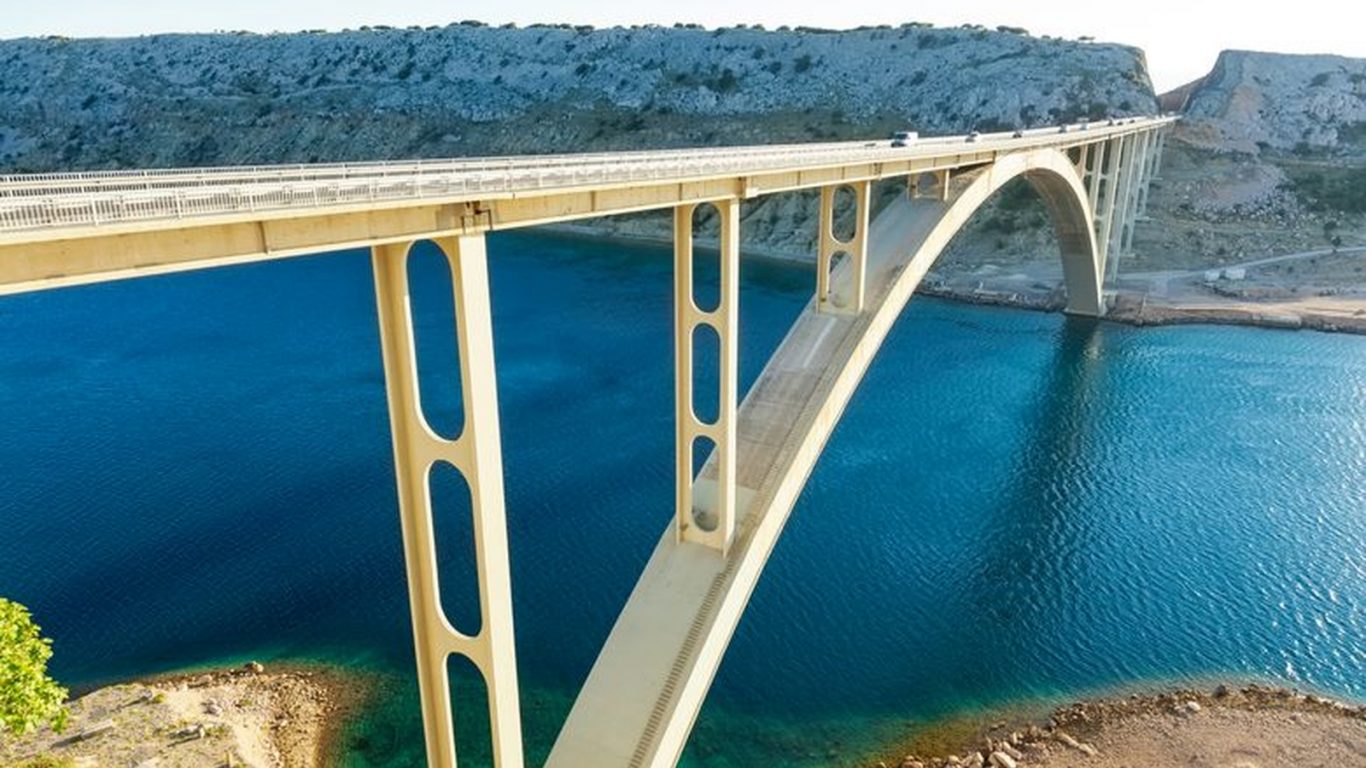 Sure thing, bridges are not a reason why one would visit a certain country. But they are lovely spots nevertheless. Here are ten Croatian bridges, many of which you will pass through if you opt to have a driving stay. And since we mentioned driving, we really suggest you download Croatia by Car app, our digitial assistant for your vacation travels.

Situated near a small town called Maselnica, this bridge crosses Novsko Zdrilo strait of the Adriatic, carrying road D8. Interestingly enough, the structure was destroyed during Serbo-Croatian war in early nineties, only to be completely renovated in 2005. Known for its distinctive red color, Stari Maslenicki is often used during strong bora wind emergences, as traffic is safe in comparison with some other bridge localities in the vicinity.

A southeastern gate of Zagreb city in the making, Domovinski Most (Homeland Bridge) is crossing Sava River with style. Initially it had numerous LED diodes, which provided it with a fancy look and greatly impressed residents of Croatian capital. Featuring four traffic tracks for motor vehicles, the bridge is also equipped with cyclist and pedestrian pathways.

Not a single structure, but a system of numerous tiny Croatian bridges that cross Gacka River in Lika. These charming constructs are so picturesque one can’t decide which one draws attention most. A tiny bridge of Licko Lesce and wooden pathways near Majerovo Vrilo are considered especially beautiful, in addition to the one crossing streams near Tonkovic Vrilo.

Near romantic Omis Town in the upper parts of Cetina River, Pavica Most is a stone structure that has been existent for no less than 115 years. It survived strong damage during World War II, but never ceased to be functional and providing traffic link to people of nearby Poljice. Renovated in 2012, Pavica Most was named after Alfonso Pavic, a notable benefactor from Croatia’s past. It is situated near Kraljevac hydro plant, which operates since 1912.

Connecting Island of Krk with mainland, Krcki Most had the largest concrete arch in the world when it was built in 1980. Almost one and a half kilometer long, this bridge is a joy to pass through, allowing drivers to witness the beauty of Kvarner Region and its shore from the high ground. It is also beautiful to watch from distance, as its shape joins with reflection in the water to form a DNK-like image.

Taking care that drivers of A1 motorway pass over Krka River, this bridge has a very dynamic traffic. It leads people to lovely Sibenik Town in Dalmatia region, but many opt to make a short visit to fable-like settlement of Skradin and Krka National Park.

About one century ago, two nearby settlements existed in what is today Sisacko-Moslavacka County. One was a military base, while the other a blooming civilian sector. Then, in 1925, construction of a large bridge begun that would fundamentally bond the two sites in a single urban unit. This is how modern Sisak was founded, and its lovely stone and brick bridge is still there, as functional as it was on its first day.

Standing proud above streams of Lika River, this is among the most mystical-looking Croatian bridges. Its construction was inspired by some old architectural techniques associated with the region, which add to its fable- look. Surrounded with attractive nature, this locality is often threatened by flooding. Yet, it managed to survive, serving as a nice attraction to nearby Kosinj settlements.

Crossing Drava River, this elegant bridge is one of Osijek City’s most recognizable symbols. Also called Most Mladosti, it went through thorough renovation in 2007. Having neon illumination, it is a great spot for a calm walk and relaxation, especially to those who admire nature.

Although its official name is Zeljeznicki Most, almost nobody calls it that way in Zagreb. The large iron giant is commonly named after renowned musician Jimmy Hendrix, due to his name being constantly written by graffiti artists on its outer side. To many who live in Croatia’s Capital, this bridge is a proof of local wit and determination, and one of the unsung stories of Zagreb history.

This concludes our list of distinctive Croatian bridges. Learn more about localities they lead to in our Destinations Section. Reach them with assistance of our Croatia by Car application, your best digital pal during stay in the country.