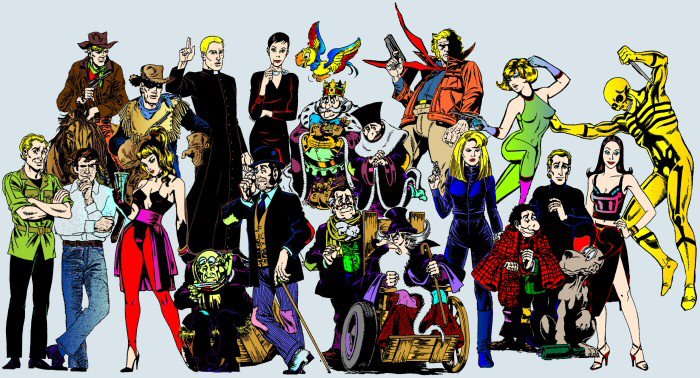 Even the most avid comic-book readers in the west might not recall the name Alan Ford. But for Croats and their territorial neighbors, it is a series that greatly influenced their childhoods, and probably left a mark on their character as well. But why is this so? How come that adventures of this particular character were completely ignored in the rest of the world, but Croats cherish it with a cult status?

The story begins in 1969, when Italian screenplay writer Luciano Secchi (also known as Max Bunker) joined talents with illustrator Roberto Raviola (working under pseudonym Magnus). Together, they imagined Alan Ford, a poor and naïve young man of distinguished look which, almost accidently, becomes a member of elite detective agency Group TNT. One might expect its agents to be highly skilled and disciplined operatives, but in reality, they are literally starving or sleeping in their headquarters- a neglected flower shop located in New York City.

The section is led by mysterious “Number One”, a long-bearded old man in a wheel chair, seeming to be thousands of years old and often retelling his meetings with various real-life historical figures.  The group includes misfits and dropouts, such as British kleptomaniac of noble roots called Sir Oliver and German inventor Grunf which oversees silly gadgets to aid Group TNT causes. Although often fighting crime on global scale, the operatives are underpaid and on verge of poverty. As people, they are lazy and lacking motivation, but also cunning and streetwise in critical events.

Just as members of this group became widely known in Croatia and the rest of Ex-Yugoslav countries, they counterparts also gained much fame. These include anti-heroes such as Super Hik, a flying drunk that steals to the poor and provides to the rich, an almost shape-shifting burglar called Gumiflex, Anten-Men which obscures the television transmissions and many more.

As already mentioned, the comic-book series did not receive much attention on international market. However, once Alan Ford reached Croatia (at that time, a member of Yugoslav Federation) it quickly became immensely popular. Literally all generations fell in love with surreal adventures of Group TNT, their jokes and characters becoming a part of local popular culture. Even if the whole world would forget about the series, its authors could always count on Balkan region to buy their comic and read about Ford’s next task.

There were attempts to bring the series to television and in theater, but in most cases, these flopped or couldn’t provide the same success as comic. Dramaturges suggested that one of the problems lies is hidden complexity of the characters, as each of them could own a show on his own, without being bored to the audience. Yet, combined in masterfully written stories of Max and Bunker, they didn’t interfere with each other’s influence.

Almost fifty years after its first issue, Alan Ford is still being published in Croatia. Collectors are ready to pay high amounts of money for certain episodes, and owners of comic book stores are always ready to talk about their supplies. Fundamentally, the fame attracted intellectuals, which tried to explain why Alan Ford received such fame only in this part of the world.

According to some theories, the characters have much in common with local audiences- in terms of mentality and sociological status. Unlike Batman or James Bond, members of Group TNT are not wealthy and we rarely see them enjoying excessive luxury. At the same time, their wit and will to survive is a virtue that is generally cherished in economically weaker societies. Since Croatia is not as financially strong as some western European countries, such cast of roles is more attractive. In addition, Alan Ford featured a strong satirical context, which also pleased the audiences. In some way, people recognized the characters as their “own” secret agents, which have problems they could relate to, at least in comical situation.

Long story short, if you wish to impress Croats during your stay in the country, do express knowledge or interest in Alan Ford. You will certainly find a topic that an average local citizen can talk about for hours, and he or she will greatly be impressed by your awareness of this fascinating Italian comic. Visit the author’s offical website and check out availability of salement in your country.

Photo and Images are Courtesy of Max Bunker, and are used for illustrative purposes.

Discover new and gorgeous adventures on your vacation. Download Croatia by Car now.