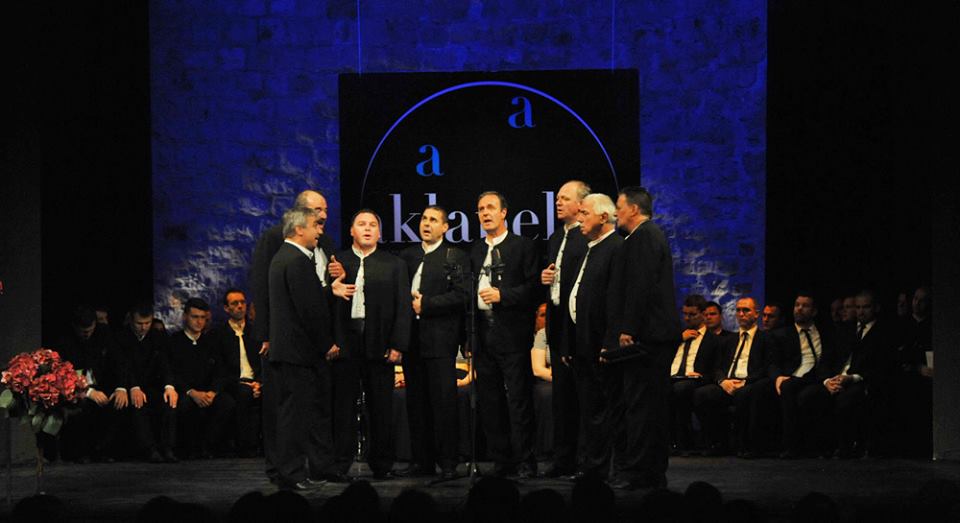 Welcome to the official website of Aklapela, a festival of the best Croatian klapas that nourish the authentic klapa singing, a festival named by a pun of the words klapa and a cappella. We greet you in the company of klapa songstresses and singers, of klapas’ artistic directors and writers of klapas’ works, gathered in Dubrovnik and willing to contribute to preserving the traditional way of klapa singing, endangered by the ever powerful commercialization and popularization aided by the almighty technology.

The songs are performed without instrumental accompaniment, and with little or no help of amplifiers, in the same way, or a way similar to the authentic one of performing Croatian traditional klapa song. The traditional klapa song did not evolve in concerts and for concerts, but concert performances are one of the ways to share the entire beauty of klapa singing with as many admirers as possible. A narrow street, a tavern, a small street, and a traditional sailing ship are the only things missing to complete the authenticity.

Unlike other numerous established music festivals that are successfully held in Dubrovnik, Aklapela is an entirely national musical product and, with visionary artistic leadership, has the potential to become a referent value of Croatian ethno-music.  We are proud that the initiative to start this kind of festival of klapa songs came from Dubrovnik. Authors and performers that made an enormous contribution to cherishing inheritance and developing the authentic klapa song stemmed from the area of Dubrovnik.

Dubrovnik is said to be the most internationally recognized Croatian city, with rich civilization heritage, and it has been the most effective insight into the world of Croatian culture for centuries. Other than with first-rate performances of chosen klapas, Dubrovnik will help to successfully promote the klapa song with its name and international acclaim.

After klapa singing has been inscribed to UNESCO’s Representative List of the Intangible Cultural Heritage of Humanity at the seventh session of the Intergovernmental Committee for the Safeguarding of the Intangible Cultural Heritage held in Paris from December 3 to 7, 2012, we believe even more strongly in the validity of our efforts to maintain and further promote authentic klapa singing.

Before we let you enjoy the music of klapa’s virtuosos, we would like to thank maestro Joško Caleta, who joined this project with love and honesty, and took upon himself the demanding role of an artistic director and the festival’s selector, which gave the whole project a serious musical support and credibility. This festival wouldn’t exist without understanding, support and help, firstly from the City of Dubrovnik and Dubrovnik-Neretva County, trusting sponsors and many associates and friends who never complained and spared their time to help give birth to this project in such hard times. We thank you all very much. Read more.

Sing along with Aklapela Festival