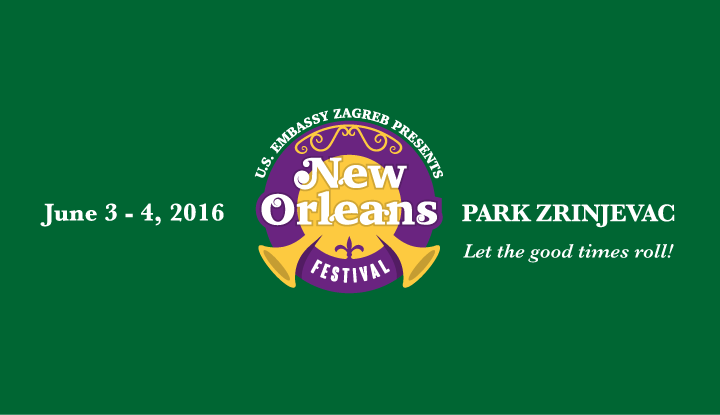 If you like New Orleans and everything this notable town stands for, just come to Zrinjevac Park in Zagreb City and celebrate the friendship between these two urban settlements. New Orleans Festival is open to public and completely free!

New Orleans Festival is a two-day event, held in cooperation with Cest is D’Best, will celebrate the culture of the famous city of New Orleans! Come and experience the Big Easy with Creole cuisine, live music, photos and more. Admission is free, so join us on Zrinjevac, June 3-4, and let the good times roll!

New Orleans is a major United States port and the largest metropolitan area in the state of Louisiana.  The city is named after the Duke of Orleans, who reigned as Regent for Louis XV from 1715 to 1723, as it was established by French colonists and strongly influenced by their European culture. It is well known for its distinct French and Spanish Creole architecture, as well as its cross-cultural and multilingual heritage.[8] New Orleans is also famous for its cuisine, music (particularly as the birthplace of jazz), and its annual celebrations and festivals, most notably Mardi Gras, dating to French colonial times. The city is often referred to as the “most unique” in the United States.

New Orleans is located in southeastern Louisiana, straddling the Mississippi River. The city and Orleans Parish (French: paroisse d’Orléans) are coterminous. The city and parish are bounded by the parishes of St. Tammany to the north, St. Bernard to the east, Plaquemines to the south, and Jefferson to the south and west. Lake Pontchartrain, part of which is included in the city limits, lies to the north and Lake Borgne lies to the east