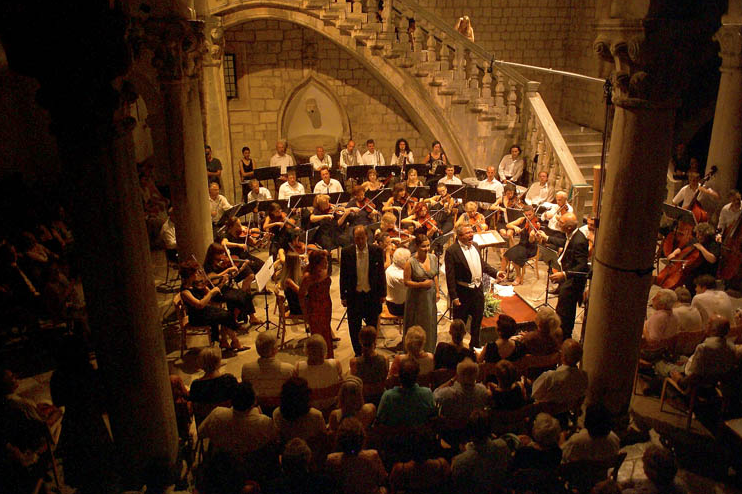 Be amazed by top vocal performances in the fascinating sceneries of Adriatic Pearl. Dubrovnik International Opera Festival will provide you with evenings full of awe and musical joy.

As if being a living organism, Dubrovnik had and saw everything. It had its brilliant moments of culture and art, being equal to or ahead of other major European centres. When its music life is concerned, the records go back to the 11th century. Since then, i.e. throughout a 1000-year old history, Dubrovnik has vigorously moulded its mature music expression either in the composing or reproductive domain of the church, stage, popular and folk music. All the old time achievements in the neighbouring Italy, were articulated in Dubrovnik almost simultaneously. When a new music and stage form, combining music, acting and dance, later called the opera, was born in Florence in the 16th century, it appeared in Dubrovnik almost at the same time. The two among the fi rst Italian operas, Euridice and Arianna, were translated into Croatian language in Dubrovnik, and printed immediately after their fi rst performance in Italy. Pasko Primović translated Euridice, and Ivan Gundulić translated Arianna.

The Aragosa Travel Agency from Dubrovnik and it’s partner Albania Experience Travel Agency from Albania are organizers of the Dubrovnik International Opera Festival- hommage Tino Pattiera.  The festival is named after and organized in the memory of the world famous tenor Tino Pattiera born on June 27th, 1890 in Cavtat, a town situated about twenty kilometers away from Dubrovnik, where he died April 24th, 1966. Tino Pattiera was one of the major singers at the opera houses both in Europe and worldwide in the first half of the 20th century. He was the leading singer at the Royal Saxon Court Opera in Dresden.

When we approached this project, our goal had several meanings and could be summarized in the following paragraphs:

Learn more on the official website of this unique festivity.